Jean-Jacques Dugas and Hugo Girard welcome you to the Popeye's Supplements Natural Classic and the Montreal Summum Classic. Sanctioned by the Canadian Physique Alliance, these regional championships are open to all Canadians who wish to start or continue their journey in the world of fitness.

It is under exceptional circumstances, imposed by the Covid-19 pandemic, that we have combined these two shows into a single event. We have taken steps to ensure that everyone - athletes, organizers, volunteers and spectators - have a health guarantee to minimize the risk of transmission of the virus. Everyone should expect to be subject to constraints such as, but not limited to, wearing masks most of the time, keeping backstage traffic to a minimum, specific call-up times for the different divisions etc. The same is true for the audience: a seat will be assigned to each person and the location will have to be respected, once in the room the spectators will not be able to move freely in the college or the campus (except for essential needs). You will understand that there will be many measures and that it is in everyone's interest to collaborate and comply with them.

That being said, with everyone's cooperation, we are confident that we can make this a great and memorable event. We are counting on your collaboration. 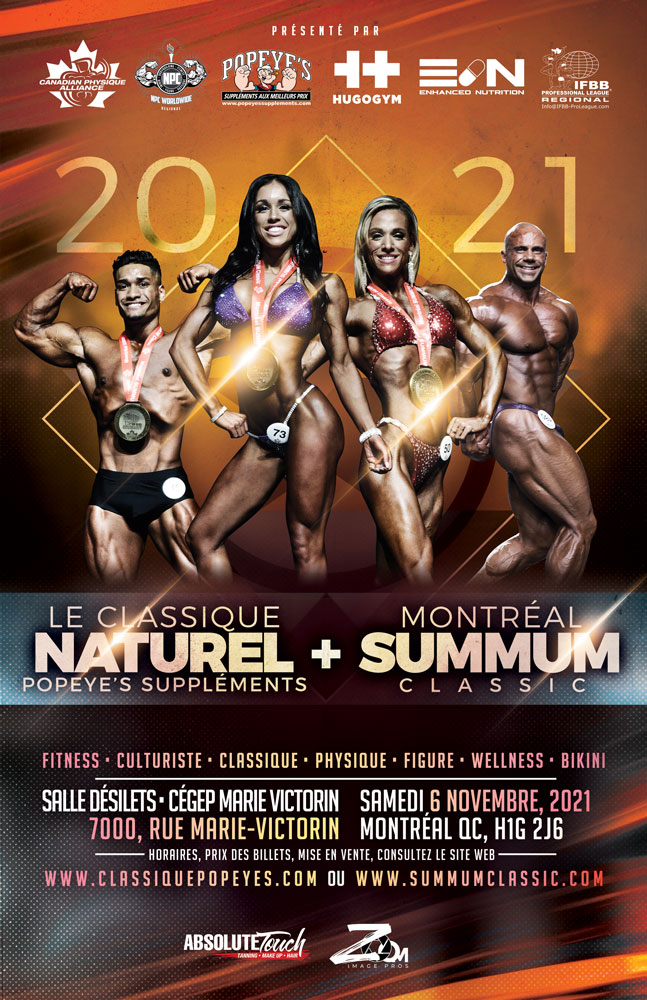 Coming from an artistic background, Jean-Jacques Dugas first worked in the organization and promotion of events in the show business world.

In 2017, the IFBB Pro League separated from the IFBB International and started its own amateur league. In Canada, the Canadian Physique Alliance (CPA) was born. At the invitation of Ron Haché, the president of the CPA, Jean-Jacques joined the provincial association APQ and became the Quebec representative of this new Canadian association.

Hugo Girard is a man of ambition, a motivator and involved in various projects. He has been involved for several years in the strongman federation as a promoter. Hugo is an ambassador for the BMR Company. He owns his own supplement company, a gym and has been seen on television in several shows (Les rénos d'Hugo, À vos risques et périls, ...). He is known throughout the world for his numerous victories in strongman competitions. He was the strongest man in Canada from 1999 to 2004, the strongest man in North America in 2000 and 2001. He also won several other titles throughout the world (ISA Super Series World Championship, World's Strongest Man, ...). Hugo Girard inspires discipline, performance and self-progress.

For the latest updates and information about these shows follow us on social media!

Don't forget to tag us and use the hashtag #CLASSIQUENATURELPOPEYES or #MONTREALSUMMUMCLASSIC for a chance to be reposted!